Tonight at 11 pm we leave the EU.
What is so heartbreaking, is that I remember us being a young couple with our whole lives facing us when our country joined the Common Market, We are leaving the European Union tonight and I am an old lady, my wonderful husband is no longer with me and I am the last woman standing from our past.
Love to all.
Sheila.x

Stan and I were proud parents to 2 young children when we joined the Common Market. I am now a great-grandma and I love it.
Love
Mary x

Dear Mary,
Peter and I were also two proud parents to a three year old and 1 year old when we joined the Common market. We have four grandchildren aged between 2 years and 15 years and I don’t see three of them. After their dad died, both our sons said life was too short to be unhappy so they got divorced, their ex wives moved away with their new partners, our sons see their children now and again for visits but for me, their grandma, I have lost them. If I am lucky, I will see them at Christmas.
Peter and I looked after three of our grandchildren from the being 6 months old whilst their parents went to work, this saved them having to pay for childminders, I looked after them through all of Peter’s illness then Peter died shortly before two of them started school but I continued looking after them in school holidays and weekends when they stayed over. Our 15 years old granddaughter has no time for anyone but her facebook, mobile phone and what’s app. I ring her to see how she is but no reply. It is as if I have been forgotten. Peter thought the world of our grandchildren, he never met our youngest grandson as he is only two. You are so lucky. I lost my Peter and then our grandchildren all because of messy divorces.
Sheila.xx

I am very lucky, Sheila and I thank God every day for being so. x

Thank you, Sheila, you are very kind and generous minded.
love,
Mary x 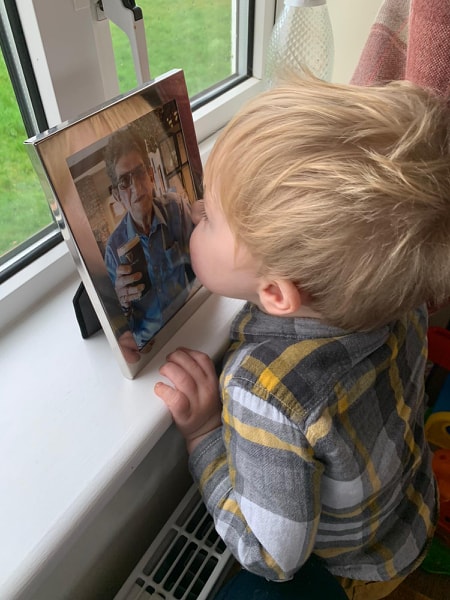 Jontyx.jpg450×600 62.5 KB
If I posted this picture before, I apologise, this photo of Stan was taken on my 80th birthday. Stan passed away exactly one week later.
This is Jonty, he spotted the picture of his great grandad, trotted up to it and kissed it. I asked if he had been prompted, but I was told that he hadn’t. x
4 Likes
Lonely 1 February 2020 12:11 #8

Oh Mary, that brings tears to my eyes. When Peter died, I was still childminding our grandchildren and we had been using a walkie talkie, one attached to Peter’s clothes and one to mine so he could press the button if he needed me. After he died, our then three year old grandson picked up the walkie talkies and said ‘can I talk to my granddad’, I had to leave the room, he thought he could press the button, like I used to do to tell Peter I was on my way upstairs and talk to his granddad. I then had to explain about Peter being a star in heaven, that night, they both stayed over and I took them both outside and I pointed to the brightest star in the sky and told him that was his granddad looking down on him. The star is still there, in the same place, I think it is the North star but not too sure,
Sheila.x

Returning to the Brexit topic as in the title of this thread, I wanted to share an article I read in yesterday’s Telegraph. It was well written pro Brexit. The author told of her appearance on radio 4 with Alistair Campbell where he was banging on about a ‘People’s Vote’. Campbell said that Leave voters were old and some of them who voted will have died now thus making the referendum invalid. When I read this I felt enraged.

My husband voted in the 2016 referendum but sadly, is no longer here. Does that make him and his vote invalid?
Sorry, I don’t mean to get political, but I just needed to get that off my chest. Thanks for listening. xx

I totally agree with you, I also heard someone spouting about the only people that voted BREXIT were the pre-Common Market people, in other words people of our age. The stupid thing is, we did NOT vote in the 70’s for the European Union, we voted for the Common Market, free trade so how on earth did we end up in the EU when we never had another vote about it.

Ooooh Sheila, I can see you and I would get along very well politically

I am sure we would, I am not all that into politics but I know what I like and dislike about them. I would do away with the House of Lords for one thing, those idol born with silver spoon in their mouths toffs really annoy me. Bring back Guy Fawkes, all is forgiven.
xxxx

My mum voted to leave she loved her politics, so sad she never got to see it happen.

Dear Jooles, it’s so sad that our loved ones didn’t get to see it happen.

My mum voted to leave too joules, I cant believe she never saw it happen either c

I hate it. She was so passionate about her politics. I’m having a bad day. Awful nightmare last night.

Poor thing. I’ve only dreamt about mum twice since she died. It’s weird. 48 years with her and then I font dream about her. My brain is obviously stopping that happen.
You had a good week last week, so its payback time for a day or two I think x

next page →
Back to top