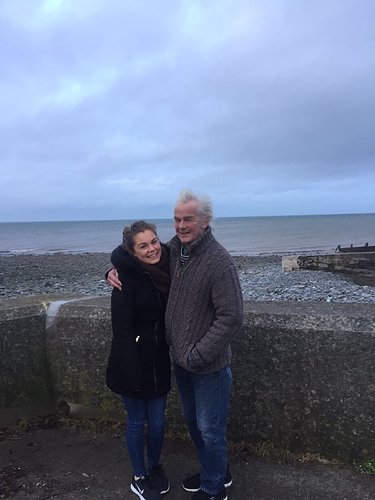 IMG_02241200×1600 186 KB
I don’t really know where to start. Even as I type this the tears have already started. My Dad, or ‘The Old Git’ as we lovingly called him, Gary Wayne Redmore, was born on the 6th January 1952 and sadly passed away on the 5th May 2020. He was a wonderful, controversial, authentic & oh so special and magical ‘Old Git’ to me and my sister. I feel like I have lost a part of myself and the world seems like a different place without him physically in it, somehow less there seems to be less sparkle in it for me. Dad was only 68 years old, he started having strokes in 2018 and apparently developed dementia, I was never convinced this was the case and thought perhaps it was ‘just’ the effect of the strokes effecting him, however now I wonder whether I was just in complete denial about him having dementia and the progressive nature of the illness. He lived in North Wales and my sister and I were in Kent, we agreed with his Mum and his brother who lived in the same village that we could move him to Kent as the hospital said he could not go back to his flat and needed a nursing home, I checked with Dad and he was over the moon to finally come and live near my sister and I. Unfortunately as our parents broke up when we were young Dad has always lived away from us, I never know why he always chose such long distances to live away from us, but I also know all he wanted was to be near us, I’m sure somehow it made sense to him. He always was always himself and at times this meant he could cause some tension in relationships, which was amplified by him drinking a fair bit at times in his life. He was a unique, complicated and wonderful person. He cared so greatly for others and would do all he could to help those in need, whether he knew them or not. And at times he was stubborn and difficult. But he was always, always, true to himself and I will forever respect him for that.

Sadly he caught Covid and passed away in his nursing home on 5th May this year. We had 9 months with him down here. I was diagnosed with bowel cancer in July last year, and Dad arrived in Kent just as I started my treatment, he passed away on the very last day of my official treatment, when I had my final scan. I can’t help but think that he was meant to be down here for my treatment, as he would have wanted to be there for me, he always was for my sister and I when we needed him. I just can’t believe he is gone, and I keep searching for signs that he is still around, that it is true that people’s spirits can visit us and stay with us. I have so many regrets that are so painful. I feel like in the last few years Dad had stopped drinking and was looking forwards somehow to growing into his old age as a family man. We had even floated the idea of him moving to Kent. I feel like he had at least his 70’s stolen from him, and the opportunity to live near his daughter, become a grandfather and just so much more. That, along with the thought of never seeing him again, is what hurts the most. I miss him so much already and I can’t believe that in a year, 10 years, 20 years or 30 years he will still be gone. The only thing which makes this more bearable is the thought that he hasn’t entirely gone, that he has left his physical body which had started to let him down, and that his spirit is free, happy and that he can be with me and my sister when he or we want to be together. I know I sound slightly eccentric, but I wondered if anyone else really believes in this kind of after-life? I feel like I have seen signs of Dad being around, like smelling his cigarette smoke in the house, or a photograph falling down, feathers, even an elderly lady saying to me a few days ago when I was out on a jog: ‘Have you caught it yet? What you’re running for?’, I laughed with her, and as I ran off she said ‘if he’s happy, let him go’, now I know I could be reading into things and seeing signs when I want to see them, but I hope this isn’t true, and perhaps they are messages from my Dad letting me know he is still with me and saying he’s okay. My love really does go out to you if you are reading this and going through your own grief right now. Fran x

Dear Fran, I am so sorry you have lost your lovely Dad. My heart goes out to you and your family as you come to terms with your loss at such exceptional times. You will find support here that is a certainty. I lost my husband over two years ago and I can confirm you will get little signs from your Dad. They stay close by, gently guiding you

Dear @Fran Thankyou for sharing this beautiful post about your wonderful dad. You clearly knew him so well and I guess you are probably quite similar - I have always also so thought about the afterlife and how this may work as I do believe in the spirit and that this lives on. All of the things you notice and look for now tell me that his spirit does live on - through you - as your sister and you are part made you of him and his genes that is where he will continue ! In the things you laugh at and notice around you and they way you are and also how you will have been changed by loosing him. It sounds like it has been a tough few years for you with so much happening and now maybe a lot quieter with time to reflect - this post Shows me you are clearly a talented writer and I hope you can keep this beautiful honest and true testament to your Dad because it is very special.

Hi @SanW, I just wanted to say thank you so much for your lovely & kind message. I am so so sorry for you that you lost your husband. Thank you for sharing with me that they do stay around, and ‘guide’ us, that is such a comforting thought. I will keep on looking out for signs sent from my Dad

Love & strength to you. Xx

Hi @Ailie, thank you so much for your comforting message. It’s so helpful to hear that other people do also really believe in the spirit & afterlife, I don’t know how it all works, but I felt I believed in it, but have been second guessing myself, so hearing from others really is comforting. It’s funny you mentioned the genes thing and that this is how he will live on through my sister & I… as until Dad passed away, (although I knew about genes…!), I’d never really thought about how that literally means he is with me. It has been a rough few years, I think Dad was ill for a while longer than we realised and protecting us from this truth (although I just so wish he had said something, so we could have tried to get him the medical help he needed), and I had been ill for a few years without realising it, but both our illnesses ‘came to light’ at exactly the same time, and also ran their course as it were, at exactly the same time. I use to joke with Dad and say to him ‘you and me, we got ourselves in a right mess!!! But don’t worry, we’re clawing our way out of it now’… I never thought he would pass away so soon, I really truly believed we would both be able to fight our illnesses, but I think maybe Dad’s priority was seeing me get better in the end & I am thankful he was able to do this & I truly hope he passed away in peace with this knowledge. Thank you for your lovely comment about my writing! You know it’s a funny thing, I’ve always loved writing and have thought about writing books but never had the courage, or drive I guess, to do it. But since the last few years I have put serious thought into putting pen to paper, I’d like to write something which could help other people facing difficult times (even as I say this it makes me think of how my Dad was💓), but I would dedicate the book to him so his memory can also live on through this too and his wonderful energy be shared with many more people. Take care. Xx

Hello, Fran,
Thank you for sharing your beautiful words about your dad. Such love does not disappear, I firmly believe that love never dies, it becomes a love which shines from behind the eyes.
In my mind when the time is right you will be reunited with your beloved dad. He will always be with you,
Take care, keep safe,
Love
MaryL x

@Fran88 oh Fran, your words are so like mine about my Dad who I lost 6 months ago. I’m so sorry you’re on the same boat as I. Your Dad looks like an amazing friendly man. Much like mine. Dad was only 64, he died 1 month before my 27th birthday and like you I’m plagued with the thoughts of everything he will miss. It’s the worst thing in the world losing your Dad. He’s our hero, the first man who loved you unconditionally and you loved him as much too. He’s our protector and without him, you do feel so lost. Every day I wake up, it feels like half of me is missing. I carry around a heavy feeling in my chest everyday.
Our Dads sound so similar, the way you’ve written about him is so beautiful. I bought a ‘for Dad’ diary and write to him often, pretending he’s reading them somehow and not missing anything out. Would you ever consider doing something similar?
I had my first tattoo done on what would’ve been my Dad’s 65th birthday in March. I find doing things for my Dad is what really helps me.

Keep speaking about him. Keep doing things for him that would make him proud. Love never dies. He will always always be with you. I wear my Dads ashes around my neck everyday and ‘take him’ everywhere I go. He will always be your amazing Dad, never forget that. I try to think that we are so lucky to have had the best Dad’s and the most beautiful relationship with them. I had some signs from Dad that he’s still with me, don’t doubt the signs. They are them!

Please message me if you ever need to talk. We can share our favourite memories with our Dad’s. I’ve found it most helpful speaking to people of a similar age to me, I do understand what you’re going through.

Best wishes and take care of yourself.
I’ve attached a photo of the tattoo I got (I hate needles btw!) of Dad and I on his motorbike. No pain will ever come close to the pain we are in now.
Steph x 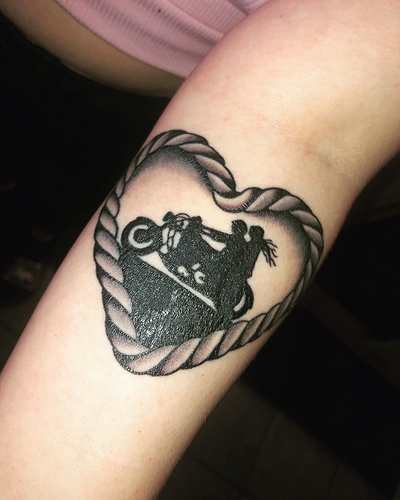