I just want him back

Had the funeral yesterday for my beloved Rob. Felt so final. Guess it didn’t feel quite real before. I’m all over the place to-day. Feel so isolated too as I don’t drive (can’t for health reasons anyway) and we always went out on ‘adventures’ finding new places and visiting our favourites none of which are accessible now as they are not even on bus routes. Places we used to sit and watch nature. I just want him back

Dear @Sal3
I am so sorry you are going through this terrible time. Many of us have been there or are there now.
Youve been handed a new life that you never asked for and that you don’t
want. It is the hardest thing you’ll probably ever have to suffer or cope with.
It changes every single thing about your life and I too have cried, sobbed, screamed I WANT HIM BACK
Please know there are people on this forum who really understand how you are feeling and some may be able to give comfort or advice. I hope you find support from friends and family too.
I am one year today and my heart hurts so much.

I feel Yr pain, its early days, take baby steps, sometimes, no steps at all, I keep praying, for my sister to come back, every day is a reminder, please don’t push yrself to hard, there’s a long way to go yet, you will get there, saw a photo today, of my sister dancing, like a nutter, made me smile, for the 1st time in ages, we are all united in grief, and will support each othet

You too my dear, I’m here for you, standing and trying together, baby steps🍀

Thank you for your understanding and support. Means a lot. Only if you have lost a loved one too can you truly understand the pain. Family say it’ll heal over time, but I don’t think it ever will. I have 2 grown up children that live nearby and they are as supportive as they can be but with children to look after and jobs to go to I am on my own a lot of the time. I’m 68 and have ill health and my dear Rob looked after me. He was a true gentleman and so kind. Saying we’ve been handed a life we didn’t ask for or want is exactly it. I know I’mnot alone here. Thank you and ove to you all x

,love you to sal it’s a horrible journey we’re all on lv annie x

I too lost my husband 18 months ago, he was admitted to hospital during covid and for the first week I wasn’t allowed to visit. At the start of the second week I got a call telling me that I could visit. When I arrived at the hospital the doctor said he needed to speak to me at which point I was told my husband was dying and wouldn’t be coming home again. It was unreal, it couldn’t be happening, when I got home I screamed, shouted and sobbed. They couldn’t tell me how long he had left, days, weeks, months. Eight days later he was dead, his liver had failed. He walked into hospital as my husband, but by the time he died he had lost his ability to speak and could only grunt and point, he was delusional, couldn’t toilet, clean himself or do anything for himself. I lived at the hospital during his last couple of days, even though no other patients were allowed visitors and for that I will be eternally grateful. He was my world, my everything, we had just retired and had so many plans and like so many of you have said, this future was just ripped away, leaving a massive hole that cannot be filled-by anything. You are right when you say that after a few months people think that you should be OK but they have no idea, you do have to go through it to have any concept of what it feels like. Eighteen months on and I still cry lots, everything just seems so empty and pointless. I don’t cry every day now but I still cry. My heart goes out to each and every one of you

So sorry for your awful loss. My husband also died of covid. I was only allowed 10 mins with him at the end. I miss him so very much. He was my soul mate. We had been together 49 years. My sister sent me a message this week saying , as its now a year that i need to forget it and move on. I am furious and nobody understands unless it has happened to them. It never goes away. We learn to live with it, but never get over it.

That is a terrible thing to say to someone who is mourning the loss of their husband. If it was only that easy.
It’s 14 months for me now and doesn’t get any easier. I cry myself to sleep every night. 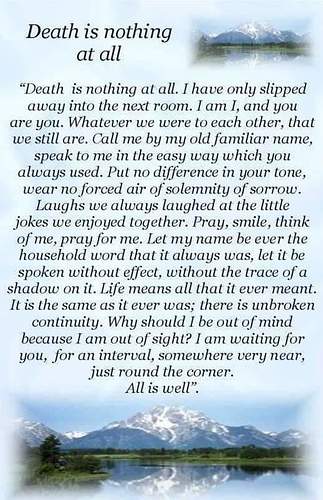 My god yr sister must have had a bad day, try to forgive her insensitive words and attitude

I refuse to answer the phone to her. She doesnt understand. She still has her husband. I only communicate with her via text, then i dont have to face her as im likely to say something i might regret. X

Me to barb. I have a cushion made out of one of my husbands shirts, which i put his aftershave on and cuddle in bed. Nothing can take away that pain. Empty house, empty heart, empty life without him x

It was evident that my sister felt that as this Christmas was the second since my husband died, everything should be back to normal now. You are perhaps right in texting only. I have now had three arguments with my sister, one on Christmas Day when she showed no sense of understanding regarding the enormity of my loss and she is a counsellor herself.

My sister sent a text saying ‘now you are free let’s hope 2022 brings lots of new possibilities’ when my partner was discovered dead in his house Dec 1 I know she doesn’t mean badly but I had to write back that I was totally devastated and what could I be free from, people who haven’t been down this hard road just don’t get it, I have to be careful and distance myself just to get through, it obviously isn’t meant badly but it feels like being hit by a steamroller. That’s why it’s good to only really communicate with people who have some understanding like the lovely people on these threads big hug everyone

Caroline, i totally agree with you. Only people that have suffered that loss understand. Its difficult losing any member of family, but losing a husband is much more difficult one to come to terms with and learn to live alone, after spending most of your life with them. Keep posting on sue ryder, lots of people in same situation. X