Hi,
Lost my husband, best friend and soul mate 12 weeks ago to a horrid 5 year battle with cancer. He suffered so much the last year and half.
I really want to know if he is ok now. I have been to mediums before years ago, and since my husband passed keep thinking should I go and see if he can let me know he is ok.
What are your thoughts on this please?

I am booked in to see one on Tuesday. I’m happy to let you know how it goes. I haven’t told her why I’m going or what I’m expecting to hear from here; I hope she is guided there herself. I will let you know,. X

We have a mediumship night here once a week in our town. They have all been pretty bad. Apart from one lady who simply astounded me. I was in an audience. I just turned up on the night so she had no idea who I was. It’s long winded to post all the details but she said told me stuff that I just cannot believe. That only I would know

I had a reading last night.

I’ve been desperate to contact my dad who we lost suddenly to a heart attack in March. I would recommend trying it at least. She said a few things that made me- a sceptic- sit up and pay attention.

Definitely give it a try, and if possible try to record it to go back to at a later date to try and see if anything else rang true x

Yes please cat, let me know how you get on and how you feel after. Be careful not to expect too much though, as I will if I decide to go.

That sounds intriguing jooles. And positive. The one I went to years ago I did the same. Just turned up at a local one in the next town to me and he told me things about my granddad he could not know.

Thank you Allie, that is a good idea about recording it.

I was eager to visit a medium after my husband passed away but my friend strongly advised against it. She is a great believer in God but never preaches her views to me.However she said that very bad spirits can often come through and relay things that will make you believe you are actually in touch with your loved one when you are really tapping in to evil.My friend is a lovely sensible person but she is adamant that people should not try to contact lost loved ones because of the reasons stated.I don’t know much about the spirit world and have never really believed, but my friend does and has suffered grief and much as I have.Obviously people will still believe what they want to but personally I have never heard a medium describe heaven or how spirits relate to the afterlife. Their contact is usually very vague and their ‘spiritual’ contacts are never really specific.

I’ve never been one to believe in those sort of things, but I think in time I might be curious to take the step. Mainly because I didn’t see my dad for about 2 1/2 months before hand due to him being in hospital & feel think we missed his final days. At the moment For me it’s a little too raw for me to visit one as it s been 12 weeks since my loss.

Good luck with your visit if you decide to go x

Thank you all for your thoughts on this. Still undecided. Think it may still be too early.

I’m told you need to wAit at least 6 months. I waited 5 months and the medium was suprised my mum came through as it can take a while. She told me the exact time frame mum had died.

. Along with other information that left me speechless

So pleased to hear that others are thinking of seeing a medium. I’ve been thinking about doing the same but it’s been 3 months since she passed and I miss her so much, it’s not getting easier so I’ve wondered about trying to contat her - but don’t know how I’d be if I coundn’t contact her, although I don’t know how I can feel any worse. I would love to hear of other people’s experiences.

I don’t have the expertise of someone like @Jonathan123 in this area, so I cannot give an opinion on the question, what I will just say is that there are unfortunately many scammers out there who use techniques like cold reading to deceive people. The magician Derren Brown shows this, if you google “derren brown talking to the dead part 2”, you will see how he can guess the name of the dead mother, that she died in her 50s, and that her dad when she was young … Derren never claims to actually be talking to the dead, he says he uses techniques that magicians and mentalists uses, and he says of those mediums that are scammers claiming to talk to the dead as being “An insult, not only to the memory of the deceased, but to the dignity of the bereaved”.

There is also an hour long documentary where Derren Brown looks at the claims of the medium Joe Power who claims to talk to the dead.

None of this is to disparage the experiences of others who have visited mediums and had a positive experience. As I said, I am offering no opinion on this topic and leave that to those with more knowledge, just think people should try and ensure the medium they visit is honest, because there are a lot of scammers out there preying on the emotional turmoil of those who have suffered a bereavement, and I think that is absolutely despicable. 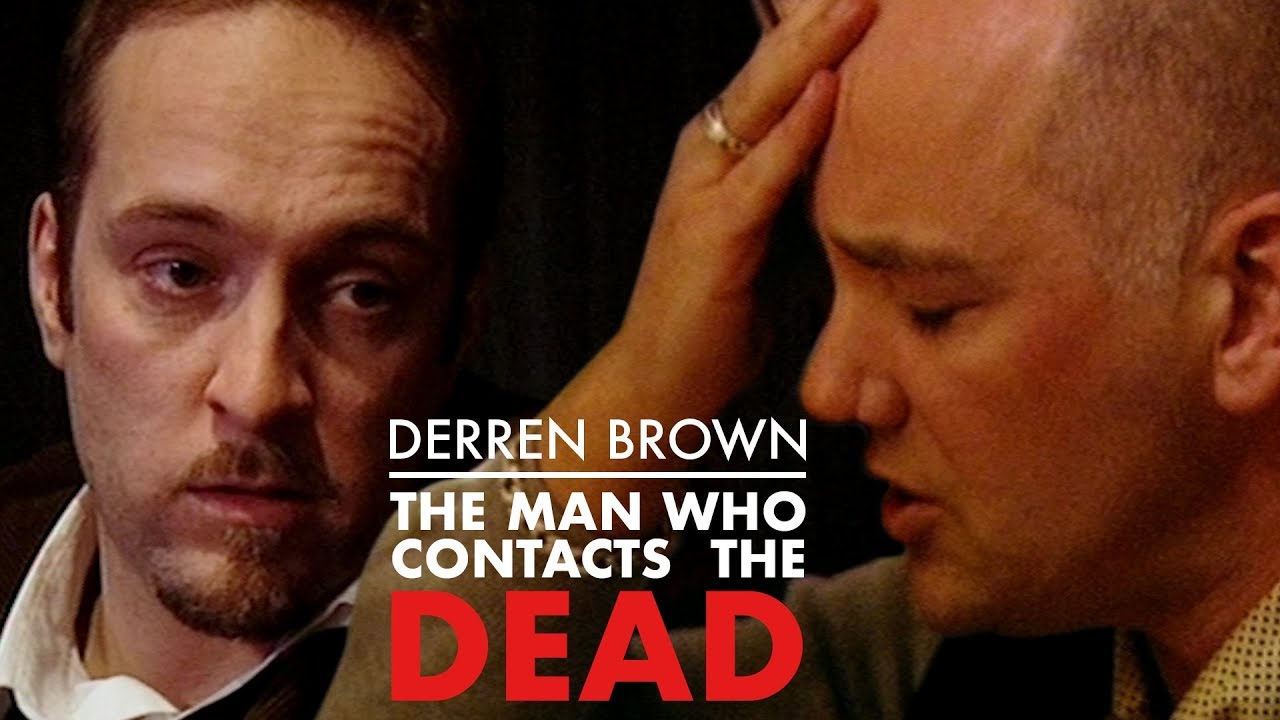 I just watched that Derren Brown clip. That “medium” was horrible. No warmth or empathy. He was definitely a fake I could tell it from the beginning. I do think there are genuine people out there. My lady I visited I could tell there were some guessing at play. But I think it’s because they are not skilled enough to decipher the information. She still told me information that was not cold reading or just general facts. But so accurate. That I guess I’ll never know how she did it. As she didn’t even know my name

Hi. Abdullah. Thanks for an interesting post and video. The world is divided into believers and sceptics on any subject you care to mention. Peter Dawkins is adamant that God is part of the human imagination and is there because we need Him to give us comfort. The Pope would argue otherwise. Why people debunk other’s views I have no idea. Because they don’t understand the subject they dismiss it out of hand. There are so many unanswerable question. The ‘Big Bang Theory’. This cloud of gas that exploded giving rise to the Universe! Ah yes, but the question as to where the gas came from originally has never been answered. For all our cleverness we just have no concept of what lies beyond our five inadequate senses. Dogs have this powerful sense of smell. Because we don’t have it does it mean it does not exist?
As to mediums. Yes of course there are those who play on the emotions of the bereaved when at their most vulnerable for reward. Charlatans are sure out there. But would you condemn all surgeons because one gets struck off for bad behaviour? Before anyone goes to a medium they should check and double check their credentials. Do they belong to an organisation? How long have they been in practise? Are there any recommendations from those who have been there. Most peoples ‘gut instinct’ will tell them if a person is genuine. If anyone wants a reading it might be a good idea to get in touch with your local Spiritualist church. You don’t have to join, just ask. Controversy surrounds this subject and we can only make up our own minds as to it’s veracity. But to condemn anything out of hand without investigating is just putting on a blindfold.
There was no bigger sceptic than me until I married to my wife who was psychic. It’s not a case of skill. Some mediums we would regard as ignorant people, but can seemingly contact that other dimension. To so many, if it can’t be contacted by one of our five senses then it doesn’t exist.
A very difficult subject. In the Old Testament of the Bible so many prophets saw and heard intimations of an afterlife. We can’t just dismiss it out of hand, nether should we believe because someone tells us it’s true. We have to find out for ourselves. I do believe strongly that death is not and end. The journey continues after we pass on. But an open mind is essential in any investigation.
Hope you are well. Kind regards. John.

Hi Jonathan, I do believe in an afterlife, and I think it is possible that some people have special powers, so definitely do not want to disparage the positive experiences of others.

I just really dislike scammers! So when I see the Derren Brown documentary, and when I see all those women that Joe Power is deceiving by claiming he has spoken to the dead, it really bothers me. There was a TED Talk by the magician Keith Barry, in it he correctly told a woman her ex was called Mike, in another he correctly told a woman her deceased relative was called Kenneth, he had never met these women, so I guess when people visit a medium they have to try and ensure that they’re visiting someone who is being genuine when they say they’re talking to the dead and not someone like Keith Barry who just has the skills to work out these things. As you say, people should do their research before they see someone, or to quote you, sort the wheat from the chaff!

Glad to have you back, you’re the one who usually responds to people who have not yet received a reply, saves me from having to do so!

Hello all
So I had my reading today with a very well known medium, who I won’t name on here. Firstly, I had zero expectations about who was going to come through, if anyone. I need time to digest everything that was given to me during the reading, but the headlines are that it was very accurate and the medium knew very detailed things that they couldn’t possibly have know about me and the very significant person that had passed. I’m not saying to rush out and book a reading, but my experience was a positive one and it’s given me comfort x